Skip to content
Geshi Automotive came to a close with its one-month "2017 Excellent Model and Enterprise Selection Campaign". A total of six awards were selected for this selection event, which were distributed in different fields. Among them, in the "most popular luxury brand of the year" column, Mercedes-Benz has the highest vote rate, followed by Audi and Volvo. 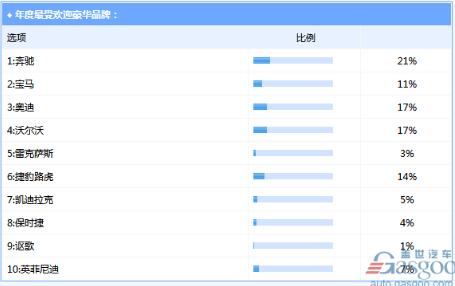 In 2017, in terms of sales performance of luxury cars, although the first camp led by BBA is still ahead of the second-tier luxury brands, we can still see that the first and second-line camps are facing many Subtle changes.
As far as the first camp is concerned, Audi's monthly sales have continued to lead since the second half of 2017. At the same time, Mercedes-Benz is pressing at a higher growth rate. In the end, Audi completed the lead in the key fourth quarter and won it in one fell swoop. Luxury car market sales champion; Mercedes-Benz and BMW, although missed the "championship" throne, but led the growth rate, and in the total annual sales, the gap with Audi has gradually narrowed.
In this selection survey, Mercedes-Benz's vote rate was 21%, holding the top spot. Secondly, in the first camp of luxury brands, Audi's vote rate is second only to Mercedes-Benz, and BMW ranks third.
In the second-line camp, Cadillac has continued to enter the threshold of 100,000 mark sales in 2016, and continued to exert its strength in 2017, replacing Jaguar Land Rover with a large growth rate and taking the position of the second-best marketing champion of luxury brands. From the sales performance in 2017, in the second-line camp, in addition to Cadillac, Jaguar Land Rover, Lexar, and Volvo have all entered the mark of 100,000 units per year. Therefore, the current situation in front of the second-line luxury car camp is no longer simply to pursue an annual sales volume of 100,000 units, but has become an annual sales of 200,000 units.
It is worth mentioning that Lincoln, who returned to China twice, has already squeezed into the top ten sales of luxury brands by relying on the help of its SUV products. At the same time, two Japanese luxury brands, Infiniti and Acura, are relatively weak.
In this annual selection, Volvo took the lead with 17% of the votes in the second-line luxury camp, which was the same as Audi and ranked second in the â€œmost popular luxury brandâ€ camp.
In addition, Jaguar Land Rover has received 14% support from the industry and consumers, and this support rate far exceeds Cadillac and Lexus. The author judges that Jaguar Land Rover's support rate is relatively high. It is not unrelated to the fact that it has been deeply cultivating the local market in the past two years and continues to provide more competitive products.
In fact, in today's globalized development, luxury brands are more concentrated in intelligent network, auto-driving, new energy and other fields.
Take the Audi brand as an example. In 2017, Audi released the first production car with L3 autopilot technology in Barcelona â€“ the new Audi A8. At the same time, Audi also announced that it is about to enter the digital and technology fields, such as Audi. E-tron, myAudi and Audi AI have made breakthroughs in cutting-edge technology.
In addition, in the current state of the country to vigorously develop new energy models, electrified models are also the focus of future luxury brands. In the electrical field, since Volvo first proposed "to achieve full electrification layout in 2019", BMW, Jaguar Land Rover, Mercedes-Benz, Audi and other luxury brands have followed suit, proposing a comprehensive electrification development strategy and its timetable.
It is worth mentioning that at the 2017 Guangzhou Auto Show, Jaguar Land Rover launched the new Range Rover Sport plug-in hybrid P400e. At the Frankfurt Motor Show last year, Jaguar's first pure electric vehicle, Jaguar I-PACE The production model was officially released. In 2018, the model will be sold globally and will be the first to come to the Chinese market.
In fact, after nearly 30 years of development, China's luxury car market has already passed the stage of naked battle for â€œquantityâ€. With the strong rise of independent brands and the enhancement of users' consumption power, the field of luxury brand competition is more broad, including not only products and sales, but also higher standards in service and user experience. In 2017, after experiencing a series of price wars, various luxury brands still maintained good sales performance.