Skip to content
'Jailbreak' has recently become a topic that people have often talked about. An incident of escape in Shenzhou, Hebei Province has caused people's attention. On the morning of September 11, Wang Zhenguang, a thief, escaped from a prison in Shenzhen and finally returned to prison after more than half a month of hunting. However, just before the Shenzhou Prison Escape Jailbreak in October 25th, Henan Yubei Prison, another heavy criminal, broke through the prison's layers of defense and successfully escaped. After this incident, the safety and security measures of the prison once again aroused questions from people of all walks of life. For a time, there are serious omissions in the security measures of prisons, and whether the prisons have major dereliction of negligence in the management process has become the focus of attention. In just over a month, two incidents of escape have occurred. The public's suspicions are not out of nothing.

Prison is a special area of â€‹â€‹high danger and high seriousness. It is internally held in violation of national criminal law or criminal procedural law. Once a jailbreak occurs, it is easy to cause extremely serious damage and impact on public security and stability, and its potential social threat cannot be ignored. This is exactly why the jailbreak incident can become the focus of attention. It is precisely because of these special characteristics of prisons that prisons are an important and mature place for the early application of security systems in China. According to incomplete statistics, there are approximately 700 prisons in China, of which the Ministry of Justice deploys 1 prison, the provincial prison is 605, the municipality has 67 prisons, and more than 300 labor camps and more than 3,000 detention centers. This shows that the importance of prison security has been self-evident. 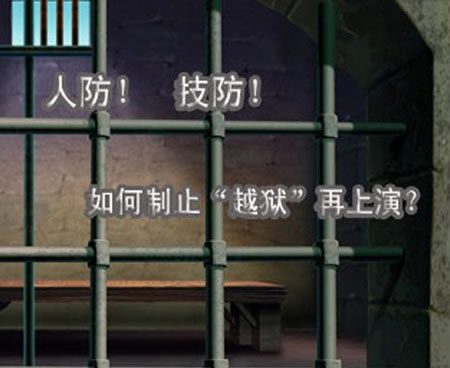 However, this security system is already very mature. Even some places where even flies cannot escape can make two consecutive escapes within a short period of one month. Whether or not prison security is necessary to learn museums and cultural relics is also a national one. Security risk exclusion work? As we all know, in the summer of this year, a number of museums and cultural relics bureaus in the country were exposed for the theft of cultural relic antiques. One of the most noticeable incidents was the theft of the Forbidden City. It was the frequent occurrence of thefts that caused the State Administration of Cultural Heritage pains and painstaking efforts. It began a rectification and elimination of safety hazards nationwide. Today, this initiative has achieved very good results. After the Shenzhou prison escape in Beijing, experts and scholars began to call for the strengthening of the prison's security and defense, and to eliminate hidden dangers in the security management and measures in prison security. However, it seems that the appeal of the experts did not have an effect. One and a half months later, a prison sentence for prison escapes took place in Henan Yubei Prison.

In fact, it is not accidental that the jailbreak incident occurred. According to statistics, more than 60 percent of domestic prisons are still using matrix monitoring, with electronic locks and access control. Perimeter protection is dominated by infrared or pull fence systems, and some prisons have grids. Speaking of matrix monitoring, its basic function is to switch video images from any input to any output channel and play a central role in the entire video surveillance system. There is something that can make the video surveillance system cover a larger area. It is also an inevitable result of the development of video surveillance technology to a certain extent. However, its shortcomings are also very obvious. The matrix monitoring system needs to be manually switched so that it is prone to flaws during monitoring. Since most systems rely on human operations, mistakes are easily made when there are many situations and emergencies, which affects the retrieval and clarity of images. At the same time, due to system system integration is not enough, if you can not grasp the contents of the entire event will miss the best event processing time. In addition to video surveillance, there are also alarms in prisons, but alarms also have their deficiencies, and sometimes the items are misreported or deliberately departed. It is these loopholes in the security system that allow prisoners to avoid monitoring. From the point of view of the two jailbreaks in Hebei and Henan, it was early or early morning when the prisoners chose to choose. This is the time when prison guards are most attentive, and this adds a weight to the success of prisonersâ€™ escape.

The frequent occurrence of jailbreaks is a great provocation against the law and has caused the judiciary to pay close attention. On how to strengthen security in prisons to prevent the occurrence of such incidents is also controversial. When many people are in the process of how to realize the combination of civil air defense and technical defense, how can the prison management department learn a lesson from the National Cultural Relics Bureau? First of all, does the nation's most basic security monitoring system carry out a nation-wide hidden exclusion?

Crankshaft is the core of the power end,  it is the key transmission components of mud pump, more an important safety component. Crankshaft must have sufficient rigidity and fatigue strength. Therefore, the crankshaft is made of ZG35CrMoRe through precision casting. The material has an excellent mechanical properties after post-strengthening treatment. High strength, toughness and fatigue resistance, improves the service life of the crankshaft. To reduce the weight, The crankshaft is hollow.  The three throws on crankshaft are equipped with eccentric bearings, the connecting rod big end is mounted on the eccentric Bearing. The crankshaft rotation drives the connection rod to come true reciprocating motion.